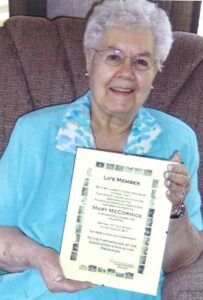 The directors and members of the Thessalon Township Heritage Association recently bestowed their highest award on two of the Association’s original directors.  “Life Member” certificates were presented to Mary McCormick and Leonard Smith on Sunday, May 15, 2011, as recognized leaders and volunteers within the organization.  Their dedication and commitment to the furtherance of the Association’s goals and principles over the past 34 years is deserving of this very special honour.

Mary was the first President of the Association when it was incorporated on March 10, 1978.  She served as a director and in executive positions until about a year and a half ago when she and her husband, Lorne, moved to Southern Ontario to be nearer to family.  On their recent visit to the area, one of their first stops was at the Heritage Park Museum in Little Rapids.

Leonard also remained an active director until he and his wife, Eleanor, moved to Algoma Manor in October of 2007.  Prior to the establishment of the Association, Leonard served 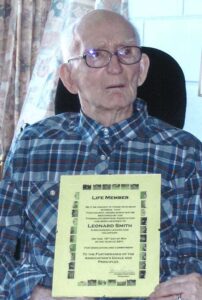 on the School Reunion Committee and on the steering committee to preserve the Little Rapids School, now the Thessalon Township Community Centre.  His comical readings were a drawing card to the Heritage Association’s annual Pioneer Night in February.  Both Mary and Leonard were ready workers at the Country Fair in August of each year.

The members of the Thessalon Township Heritage Association are deeply grateful for the commitment of its past and current directors and members as we continue to preserve local history.