You are here: Home / Community News / Notice of Bridge Closure

The Municipality of Huron Shores advises that the Nestorville Bridge on McFadden Drive was closed to vehicular traffic as of November 21, 2012.

The Nestorville Bridge is a 92-year-old structure, having been built in 1920.  This structure, along with other bridges within the jurisdiction of Huron Shores, is reviewed as part of the biennial bridge inspections that are conducted every two years.  For quite a number of years, the restricted load posting on this structure has been a 5 Tonne load limit, due to the nature of the majority of the use being local in nature, of which that local area has significantly diminished since the boom of the logging days and sawmill operations in Nestorville after the turn of the 20th century.

The review conducted this year by a Consulting Structural Engineer, has resulted in recommendation that the bridge be closed to vehicular traffic until, should Council direct so, a detailed structural evaluation is conducted.    Given the nature of the traffic in the area and the fact that there is an alternate means of ingress and egress to areas beyond the bridge there is a very real possibility that Council may determine that the structure is not necessary and may not authorize any further expenditure for detail review and/or refurbishment or replacement.  Traffic on Nestorville Road and McFadden Drive, that ordinarily might have used the bridge for movement to and from Highway 17 to access the area north and east of the bridge, may do so by utilizing Nestorville Road at Highway 17.  The current Nestorville Road entrance at Highway 17, built in approximately 2003 appears to have virtually eliminated the need for the bridge to remain. 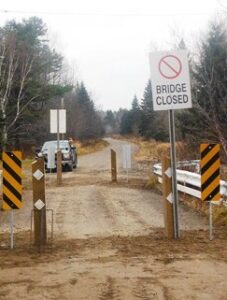 As an interim measure, Council has agreed, with its consulting engineer’s approval, to allow the bridge to remain open to pedestrians, until any unforeseen circumstances that might arise from a full closure, can be considered and/or resolved.  On November 21, 2012, Public Works forces strategically placed barricades to restrict the width of the structure which will allow for pedestrian use.

We trust that with the current economic climate, those who have used this bridge in the past will understand the need for Council to give serious consideration to fiscal responsibility prior to authorizing any further expenditure for review, rehabilitation or replacement of this aged water crossing.  It is very possible that the structure will be removed in the not so distant future given the alternative means of traffic movement available by using Nestorville Road.

Should anyone have any questions or comments on this matter, feel free to contact the Municipal Office at: